A lifelong student of yoga, massage, Reiki, and the esoteric, Kelly Marshall embarked on their RYT-200 training with Black Swan Yoga back in 2012, expecting nothing more than a fitter yoga body and an improved ability to rock a sick handstand. However, spending 8 hours a day of daily study and yoga asana practice in front of a mirror took its toll on their delusions of self-concept. Through yoga, Kelly Marshall (then female-identified) realized that they were non-binary and transgender.

With this first-hand experience of the therapeutic powers of yoga and their extensive anatomical training, they continued their studies by enrolling in the IYT Yoga Therapist training at Kripalu, delving into the myriad tools, techniques, and philosophies of yoga as medicine. They received their C-IAYT certification for this 1000 hour training in 2016.

Kelly Marshall has worked in varying capacities as a massage therapist since 2007; clinically alongside chiropractors and physical therapists as well as in various spa environments. They utilize a diverse array of techniques and tailors each session to the individual’s needs and wants. Additionally, each session incorporates emphasis on tapping into the nervous system of each client via verbal breathing and embodiment cues (as in Yoga). They facilitate a safe space for clients to reconnect with their bodies and drop into a deeper state of rest in order to heal. What they offer is unique and unlike most other massage experiences.

They specialize in creating a safe space of healing and empowerment for individuals in the LGBTQIA+ population, and those whom are addressing trauma, anxiety/depression, body and gender issues, and more. 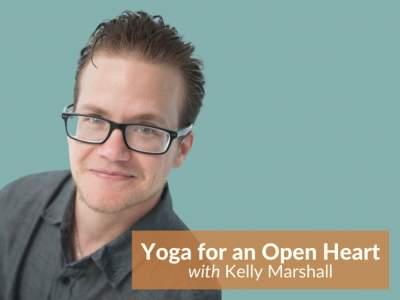 7:00 PM – Yoga for an Open Heart with Kelly Marshall